Come Play In May - Tell Me A Story

"Oh, come off it," She said. "You didn't seriously think I was going leave it alone, did you?"

The kitchen was silent except for the rhythmic sound of her chopping vegetables. One of the dogs hovered nearby, hoping for something to fall on the floor.

"I mean, when, have you ever known me to leave well enough alone? It's against my nature not to mess with things. I'm not saying that you weren't good, but you just weren't right for me, so I had to do something."

She continued to chop the vegetables, pausing only to scoop them in to the bowl. They looked pretty, she thought, jumbled together, with bits of the red pepper peeking through the various shades of green.

"I hope you aren't offended. I didn't mean to insult you."

She opened the jar of mayonnaise and spooned it in to the vegetables. Tasting it, she decided that it needed something else, something to brighten it up. Turning around, she reached into the cabinet and pulled out a bottle of rice wine vinegar. Spying the Togarashi spice and wasabi powder she pulled them out, too. She splashed a liberal amount of the rice wine vinegar to the mixture and a spoonful of each the Togarashi and wasabi, and stirred.

"Can you at least try to see where I'm coming from just this once?"

That works, she thought, and spooned some in to a bowl. She garnished it with a sprinkling of chopped peanuts, and stuck a fork in it.

"Well, if you aren't going to say anything, then that's it. I'm done explaining myself to you."

She picked up the bowl and walked towards her office, raising the fork to her mouth as she went. 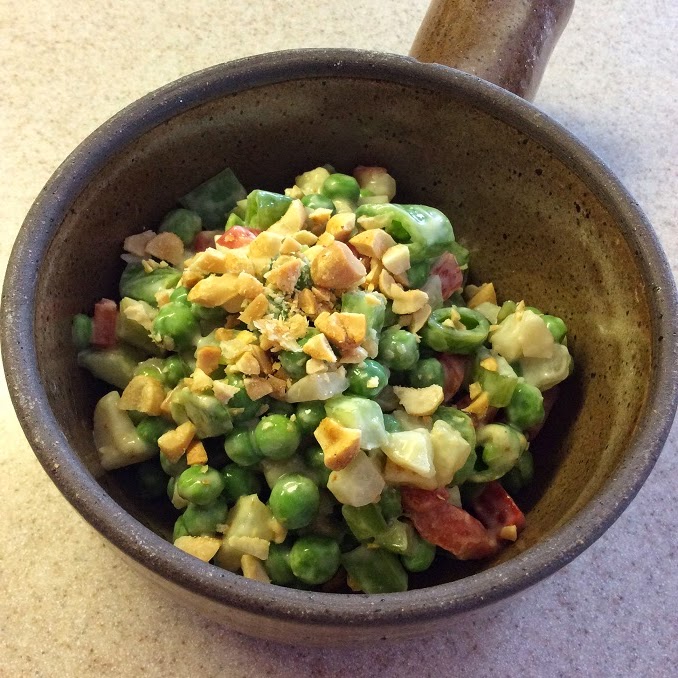 Mix the vegetables together with the spices, mayo and vinegar. Chill for at least a couple of hours. Serve with chopped peanuts on top.