There are so many meal planning boxes out there, it's hard to figure out which company is best for you. Do you go with the boxes you see advertised on tv all of the time, like Hello Fresh or Blue Apron? Do you try a different one like Plated, Peach Dish or Green Chef? If you don't like to do any prep, there's always Terra's Kitchen. Are their recipes any good? Is my husband going to eat it? In my case, probably not for this last one; he doesn't like to try new things in case he doesn't like it and it becomes a waste of food. (Household Tip: When you have three dogs, there's no such thing as wasted food, unless it's something they can't eat)

I'd toyed with the idea of subscribing to a box just to see if I can get some new dinner ideas. I know how to cook, I just get bored. A couple of weeks ago I saw some delicious looking food pictures posted by a dog parent friend on FB. I asked if he subscribed to a box, and he told me he did, one called Home Chef. I wasn't at all familiar with this box, but I looked it up, thought it sounded decent, and asked if he had a referral link. It wasn't too expensive, so I signed up, and my first box was delivered today! 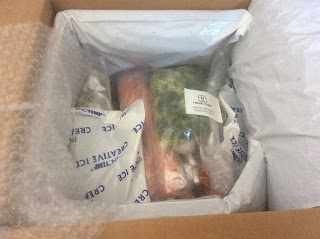 The food is very well packed, with insulation and cooling packs. (Their brochure says that the packaging and containers are all recyclable, even the ice packs). The meat was packaged separately from the other meal ingredients, surrounded by additional cooling packs. 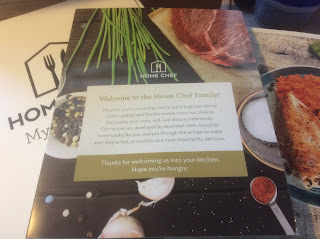 You get a binder with an information sheet on basic storage and preparation. You also get full page sized recipe cards for each meal in your order, pre-hole punched so that you can keep them in your binder. 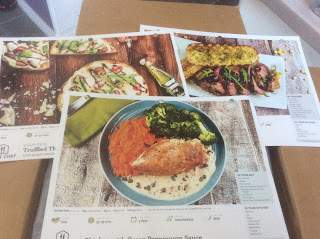 Here's where it got a little weird, though. When I signed up, my two pre-selected meals were chicken with green peppercorn sauce and truffled three cheese flatbread. I added on patio bbq steak sandwich because it looked good, like something the husband would enjoy. 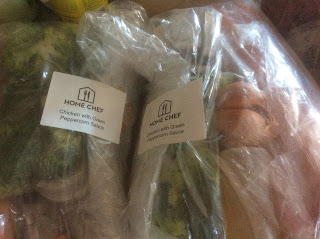 They didn't include the meal kit for the three cheese flatbread. They sent two meal kits for the green peppercorn chicken. Unfortunately, they didn't bother sending two packets of chicken breast. So I have a second bag of veggies and fixings. I immediately sent them an email letting them know about this mistake. I've gotten back an automatic response email, but no one has contacted me yet. 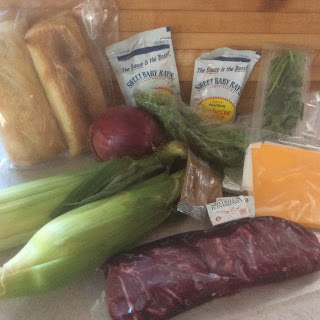 Here are the ingredients they sent for the bbq steak sandwich.The produce looks very fresh, the rolls are reasonably soft. Lots of herbs and cheese. The box ingredients are listed on the recipe card, and they also let you know what you'll need from your kitchen.

Since it's still nice and hot outside, I'll be grilling tonight. I'll let you know how it turns out.

Have you subscribed to a recipe box? Which one did you choose, and what did you think?

Welp, someone needs to get back on the healthy eating road. Hot summers in Texas have been lending themselves well to ice cream, and July went above and beyond the call of duty to help out little ice cream cones that needed to be eaten. And lemon biscuits from Costco. Yum. And then there are the little Twix Bites that my husband buys. When you leave an open bag on  the counter, they're going to jump out of the bag and into my mouth. Pretty much the only things from this list I haven't been eating is cake/donuts/muffins/pastries/nutella, etc. So, yeah, my eating has been on the sweet and snacky road lately, and that needs to change.

Some of the girls in my writing group were talking about a healthy eating challenge recently. You don't have to start any particular day, but a new month is as good a time as any to start. 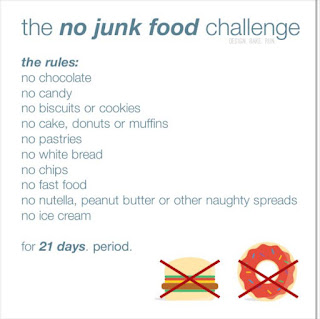 Day 1 Breakfast: 1 mug chai tea, 2 eggs scrambled with a piece of cheese, 1 cup of cherries.
Day 1 Lunch: I'm not 100% sure what will be for lunch. I might make a vegetable stir fry and serve with brown rice.
Day 1 Dinner: lamb kebabs. I made souvlaki wraps last night and have more marinated lamb to cook. I will have with the salad vegetables tonight, not in a wrap.
Day 1 Snacks: I love Mary's Gone Crackers seed crackers. I am going to make some hummus to have with them.

Also on the agenda: movement. Not an easy thing for me, my left hamstring is better, my plantar fasciitis is ok (not great). Now I have a compressed sciatic nerve in my right hip. Ugh.

Right now in the DFW suburbs we're at that balance between getting hot and OMG, who turned on the convection oven setting with our weather. In other words: Patio Weather. In the evening I like to sit outside with the dogs and browse through cook books and magazines and meal plan. By meal plan I mean something for my lunches, since The Aussie is not an adventurous eater.  This week I was inspired to make an Asian dish called Mee Goreng, which basically means to "fried noodles." There are probably as many recipe variations as there are street vendors in Singapore, Malaysia and Indonesia that sell it.  One trip to Super H Mart later, I submit my variation. 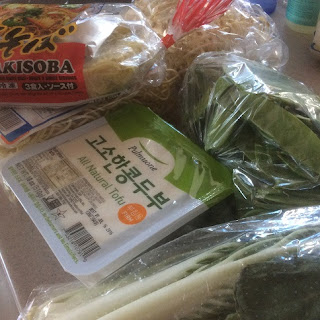 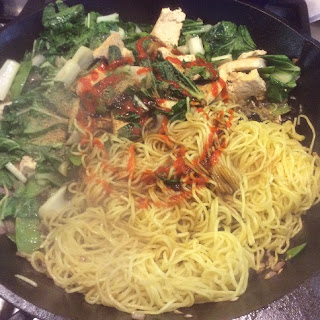 Heat up large pan or wok over high heat, drizzle in your oil (peanut oil is good for high heat cooking). Add in diced onion and cook for a few minutes until soft. Move onion off to the side and place the tofu slices in the pan. Cook for at least 5 minutes to get a nice golden color on the pieces. Next, add in the snow peas, garlic and choy sum. Stir to mix together (it's fine that the tofu starts to break up, you want that). When the choy sum has wilted a bit, move it over to the side and put the noodles in the pan. At this point, I added a little more oil, but it's completely optional. Drizzle on the sriracha, kecap manis, soy sauce and sesame oil. Stir to coat. Cook for several minutes until the noodles get hot and soften up. Just before serving, toss in a good handful of bean sprouts. They won't cook fully, and will add a nice crunch. 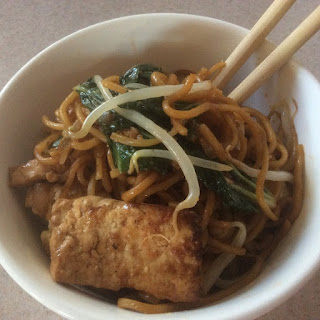 Some traditional garnishes are fried shallots or chopped peanuts, along with lime wedges. I sprinkled on some TrueLime, stirred it, and served it with a side of chopsticks.  Enjoy!

Chicken Tortilla Soup - Or is it?

Heat the olive in a dutch oven over medium high heat. Stir in the onion, celery, carrots and pepper. 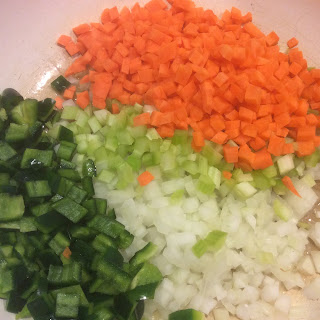 Cook for about 5 minutes until slightly softened. Add in all of the spices, Rotel, and fire roasted tomatoes. Stir to combine and add the broth or stock. Bring to a boil, lower heat and cook for 30 minutes, or until the vegetables are soft. (I used my immersion blender to puree the veggies so they weren't completely chunky.) Next, add in the cornmeal slurry. Since I'm not using corn kernels in the soup, this will add a hint of corn flavor.

When the vegetables are soft, add in the tortilla strips (they help thicken the soup), and then add in the chicken . 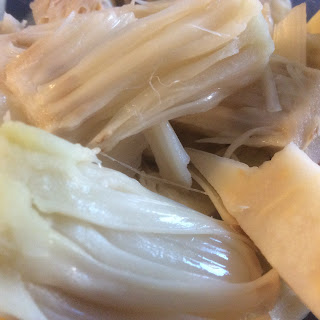 April Fool's! I didn't use chicken. I used 2 cans of jackfruit instead of chicken. ;) Use jackfruit in brine, not syrup. Add to the soup and cook until tender, about 30 minutes.

It's spicy, warming, and delicious.  It just happens to be vegetarian. Top with diced avocado, cilantro, shredded cheese, and a squeeze of lime. Enjoy. 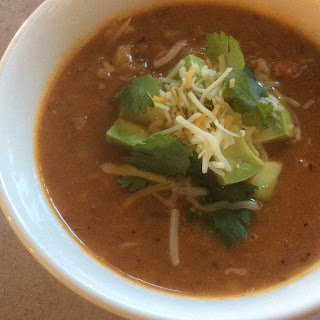 A Few days ago, my favorite Hotass posted a link to a video recipe. A recipe that was for quiche, but used very thinly sliced sweet potato slices layered to make the crust. One kitchen gadget that I have that I don't use as much as I should is my mandoline. The Aussie got it for me for my birthday several years back, and it makes the best thin sliced anything. Including fingers, but that's another story. Speaking of stories, this post is actually inspired by a person called North, who loves healthy eating. ;)

I pretty much always have sweet potatoes on hand, so I decided that this would be a great recipe to make for lunch. To make this, you'll need the following: 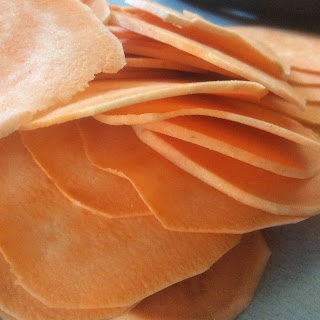 Thinly slice a large sweet potato. Spray your pie pan with quick release spray, and layer the slices on the bottom and sides of the pan. Cut slices in half to form the side layer. Bake for 20 minutes at 350 degrees. 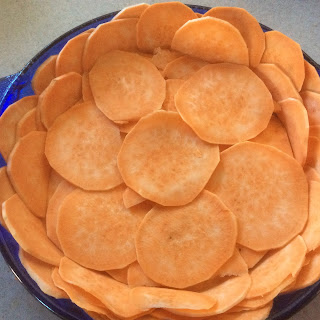 While the crust bakes, drizzle some olive oil in to a hot pan. Toss in a thinly sliced onion (I had half of a very large onion in the refrigerator). Cook over medium high heat for about 5 minutes until the onion softens. Next, add in several handfuls of greens. The video used half of a bag of baby spinach. I am not a fan of spinach these days (it makes a squeaky feeling on my teeth when I eat it) so I used a package of baby kale. In hindsight, I would chop the baby kale in to small pieces to make cutting the pie easier. Cook for 5-10 minutes, until the greens are wilted. Season with salt, pepper, garlic powder, and a pinch of nutmeg. 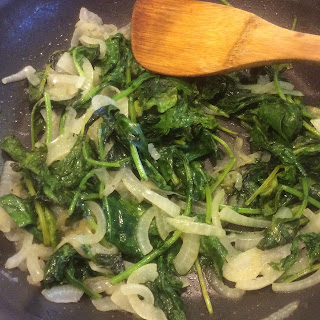 In a bowl, whisk together 4 eggs and half a cup of milk. Add in 1/2 t of salt, several grinds of black pepper (I love black pepper, so I used a lot of it), and a pinch of cayenne pepper. 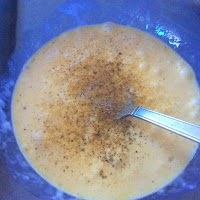 Layer the greens and onions in the pie shell, distributing fairly evenly. 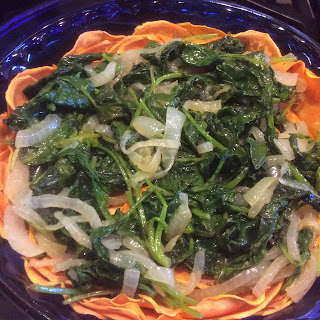 Top the greens with 2 ounces of shredded cheese. 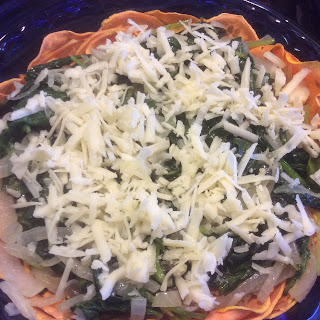 Pour the egg mixture over the greens and cheese. Bake for 35 minutes at 375 degrees. 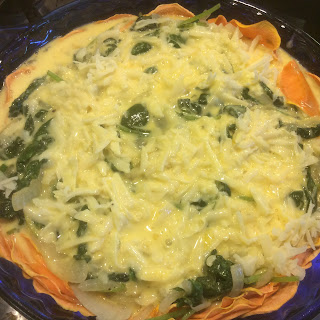 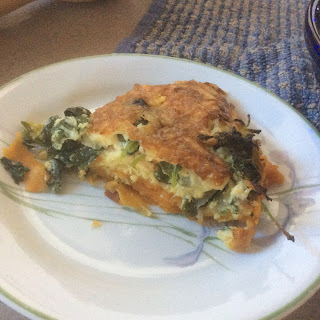 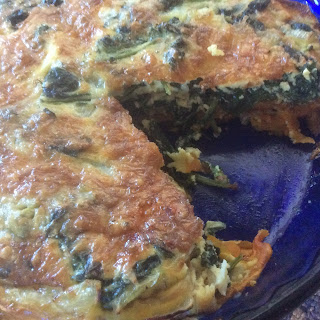