Slowly getting back into running. Did a couple of miles on Saturday that were decent. If I'd had more time I probably would have gotten in more, but time was tight. Did get in a nice walk with the dogs, too.

Sunday was interesting. Started the day by dropping a dinner knife on my foot. The corner of the handle end hit the edge of the nail on the top of a big toe. The pain reminded me of the "I want to throw up this hurts so much" pain I've experienced when breaking toes. Hopefully this will not be a break, but just a nasty bruise. Of course I stubbed the same toe later in the day, scraping the end of it on the driveway when I was putting garbage in our bin. Figures, doesn't it.

And I also joined Weight Watchers on Sunday afternoon. Several years ago I had an online account. Managed to lose the 20 or so pounds that I put on after we moved down from the Northeast. I've pretty much maintained that loss for a couple of years, but stayed around that same weight since then. Recently it's been creeping back up, so it was time I got my act back together. I've never done WW meetings before, and it was really different. People have been raving about the Points Plus method of tracking and there are so many people on FB and Twitter that have had such success on Weight Watchers. And seeing Suzi Storm as the newest WW Success Story is so inspiring. If she can have her beer and do WW and lose the weight, then I should be able to have my wine and do WW and succeed.

I'm a bit scared though, and not in a "it's Halloween" kind of way. I look at the points values of certain foods that I've been eating, and I know I have been waaay overeating. Usually more healthy than not, but way more than I needed to be. (Speaking of more healthy than not, what is with the fact that there are almost 60 pages of desserts, cakes, candy and cookies values in the Complete Food Companion? You aren't supposed to be eating crap, even if you know how many points it is.) I'm afraid of being hungry, I'm afraid I'll fail because I'm not usually very disciplined, I'm afraid I'll give up...I'm even afraid I'll succeed.
Posted by Kyra at 9:24 AM No comments:

Lessons in life from The Honey Badger 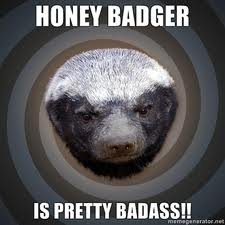 Lord help me, but the Kindle is a nifty invention. Last night, waiting for the HOA meeting to start, I pulled out my Kindle and began reading one of the many books on running that I've downloaded. This one, Marathoning For Mortals by John Bingham and Jenny Hadfield, has got me itching to race again. I'm feeling better, I did a slow and easy 5k last weekend, and it felt good. Next month I'm planning on doing a 10k at the scene of the July 4th race fiasco. This time, excuse the expression, I am going to make that race my bitch. I need to re-awaken my Inner Honey Bager.
Posted by Kyra at 2:48 PM No comments:

Shrinkvivor - And Now For Something Completely Different

You may recall (if you're old enough) the Monty Python skit where the John Cleese, as the announcer, turns to the camera and says "and now for something completely different." Well, I wish I had something completely different to report. I'm up .4 of a pound. This week was not a big exercise week due, in part, to the fact that we drove 1200+ miles from Texas to Tennessee and back for a wedding. Can't log a lot of exercise miles in a car. You don't always eat healthy meals during roadtrips either. Add to that, I'm still sick. I was feeling better on Saturday, but woke up with another sore throat and congested chest on Sunday morning. My abs are certainly getting a workout with all of the coughing I've been doing, but I'd like to be healthy again.

Congrats to all of the Shrinkvivors that are kicking butt in this challenge. You're amazing and inspiring.
Posted by Kyra at 8:17 AM 1 comment:

This weekend, The Aussie and I travelled to Tennessee for the wedding of Mary and Kepa, one of the most fun and inspiring couples in blogdom. We had a lovely time, the ceremony was sweet and fun, and we are so happy for them. 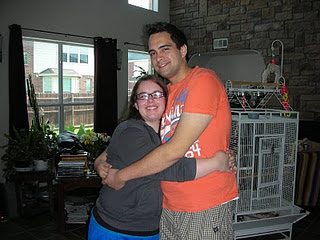 Now, some of you may know that I dabble in quilting. I haven't been doing it for years and years, but I find it enjoyable. Earlier this year I asked Mary what their favorite colors are, and she replied "purple and blue." I had decided that I wanted to make a quilt for them, and it would be in their favorite colors. Bit by bit, over the long, hot summer and fall, The Quilt came together. I was so excited as it grew, but I couldn't share on FB or twitter because Mary and Kepa might see the post! I took a class to learn how to use a longarm quilting machine at my local store, because I wanted to make the entire quilt, start to finish. This was quite an adventure, and both The Aussie and I fell in love with this quilt along the way. It made me smile just to look at it, and The Aussie said that it glowed, which was such an amazing compliment for him to make about The Quilt. The dogs, two of whom met Mary and Kepa last summer when they stayed with us on their cross country trip, were my faithful companions through the the entire process, from cutting to piecing to binding. (I must admit that, yes, there is dog hair and love sewn into the quilt, which should make Senor Kitty Snugglepuss feel right at home when the quilt arrives in New Zealand at the end of this week!) I hope they love this quilt as much as I loved making it, with happy thoughts sewn into it the entire time. 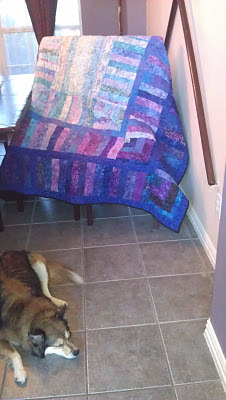 It's Shrinkvivor check in day. This is getting discouraging. I've logged more minutes (315 usable minutes), was not able to log a lot of what I did this week because they weren't "exercise" minutes (dancing for almost 2 hours at a concert, 2 hours of yardwork, walking for 4 hours at the Texas State Fair...). It's been TOM, but I've been eating fairly well, eating a lot more fruits and veggies, eating less meat, trying to get more sleep. What do I get? Up 1 pound. Jeesh. I've started doing weights again, so maybe it's muscle, but it still is discouraging when you get on the scale. I can only hope that my tribemates are feeling benevolent towards me and I don't end up on the Exile tribe.
Posted by Kyra at 8:05 AM 5 comments:

Last week I tried out a new slow cooker recipe that I saw, in all places, the November Woman's Day magazine. This one for coconut rice pudding, which, of course, I have tweaked a bit. It's meant to be a dessert, but it make a tasty breakfast, too.

2 1/2 cups reduced fat milk
1 14 oz can of light coconut milk
1/4 cup of Splenda (You can use sugar if you want. Recipe calls for 1/2 but coconut milk is sweet)
1 cup of arborio rice
1 cinnamon stick
1/2 cup dried apricots, chopped

In a 5-6 quart slow cooker (I'm not sure what mine is, it's big. This mixture only came up part way) whisk together the milk, coconut milk and Splenda. Stir in the rice and cinnamon stick.

Cook, covered, for about 1 1/2 hours. Add in the chopped apricots, re-cover, and cook for another 30 minutes. Remove the cinnamon stick before serving.
Posted by Kyra at 3:28 PM No comments:

Last night, a dream almost 30 years in the making came true. I FINALLY saw Duran Duran in concert. My bedroom was covered in posters of Duran Duran when I was in high school. And yes, John Taylor was my favorite. The concert totally lived up to my expectations. I still don't have much of a voice because of the nasty cold, but I sang my heart out and screamed just like all the other 40-something women in the crowd. It was a blast. 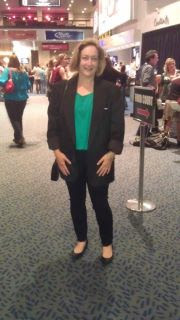 Well this has been an interesting week. Last Thursday morning I woke up with a sore throat. That sore throat quickly progressed into an all out, no holds barred, head and chest cold. Needless to say, my ability to rack up fitness minutes for week 1's challenge was seriously hampered. They weren't very energetic minutes, but I managed to eek out 200 minutes. My loss was not great, just .6, but I've been drinking so many fluids this week (and it's almost TOM, too) that I'm lucky I had a loss at all.

I finally was able to get back to the gym yesterday evening. My trainer was there, he was apologetic, and he does owe me a few sessions. I don't know why, since my telephone number was correct in the gym computer system, but he was calling another gym member's number last week trying to get in touch with me. That was a fail. But all's well that ends well. I had a good session last night and will have another make up session today. I'm glad our physical challenge will be tracking fitness minutes again - I have to redeem myself now that I'm not constantly coughing up my lungs. Hmmm. Does dancing at a Duran Duran concert count as fitness minutes?