SCOBY: is a Symbiotic Colony of Bacteria and Yeast. Mmm. Sounds really appetizing, doesn't it. I have to admit that the first couple of times I tried kombucha I did not like it. It was weird. It was sour, says the girl who snuck behind the sofa to eat open cans of tomato paste when she was little. It was eewww. Then, I discovered ginger kombucha. Mmmm. Now this, I liked. The price? Well, that I didn't like, so I started browsing around the interwebs to find out how to make kombucha. Hmm. You have your water, tea, sugar, and a SCOBY. A what??? It's this weird, slimy looking alien that you use to ferment your tea mixture. That's a baby SCOBY in the picture below. I'm actually growing my own little alien in a hibiscus tea mixture.  Time will tell if this experiment works. I'll keep you posted. In the meantime, I'm going to plant some ginger. :) 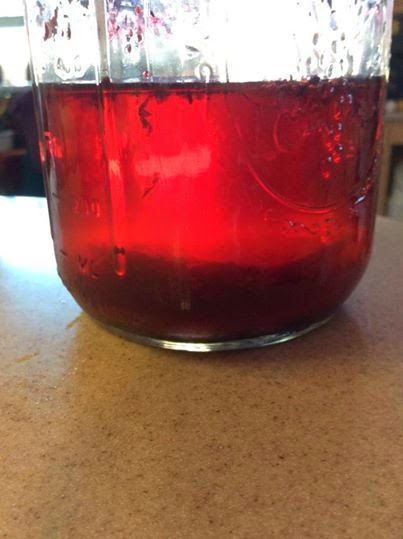 It's starting to get warm, here in Texas. Today it's 81 and sunny. That means it's almost time for the pool water to be warm enough to swim.  We don't have a very big pool. It's downright tiny compared to the others in my neighborhood, but I'm more doggy-paddle swimmer than crawl stroke swimmer, so it works for me. Last week I had to get a couple of bags of salt for the pool. 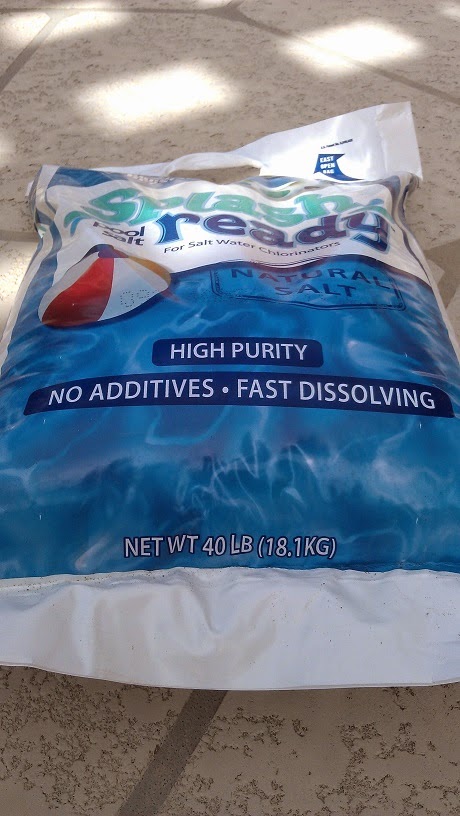 My word, it took some oomph to lift the bags in to the back of the car, unload them, and carry them out back. I set the bag down on the patio, and it tipped on its side. That's when I noticed how much each bag weighed.

40 pounds. That's about how much I need to lose. If it's that much of a struggle to carry around a 40 pound bag of pool salt, how much of a struggle is it for my body to carry around that much extra weight? How much strain am I putting on my joints? On my back? On my feet? How much am I risking injury by carrying around this weight? How much better would I feel when I run, if I wasn't carrying around 40 unnecessary pounds? It's given me something serious to think about.
Posted by Kyra at 4:51 PM No comments: 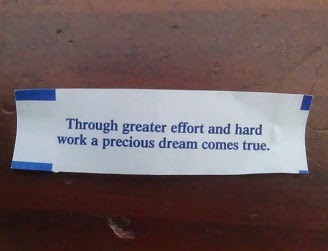 To quote an old Disney song, a dream is a wish the heart makes. Several years back, it was my dream to complete a 5k before I turned 45. This might not sound like much to many people, but I didn't start running until I was 44. It was so hard in the beginning that I would make deals with myself that I could take a walk break when I reached the next mailbox, the next driveway, the next light pole... Eventually, I made it all the way to the stop sign. I was so thrilled the first time I ran a full block.

So yes, this fortune cookie is telling the truth. My truth. Through greater effort and hard work a precious dream WILL come true. This dream is to complete a marathon before I turn 50.  The marathon in question, because I am envisioning that I *will* get registered for it, is the 2015 Disney World Marathon. I'm giddy just thinking about it. :) 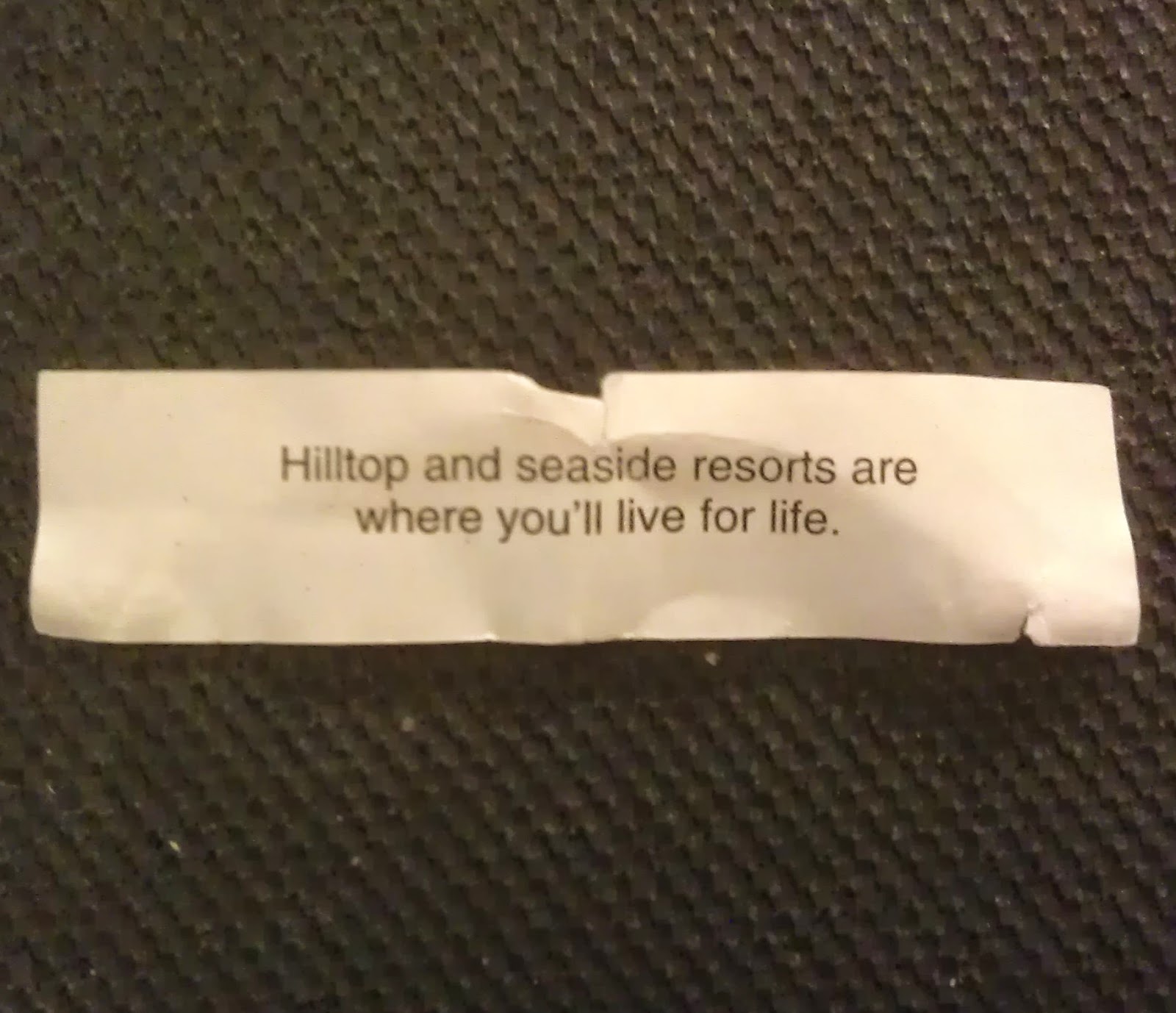 Wow. They got that wrong.
Posted by Kyra at 5:51 PM No comments: 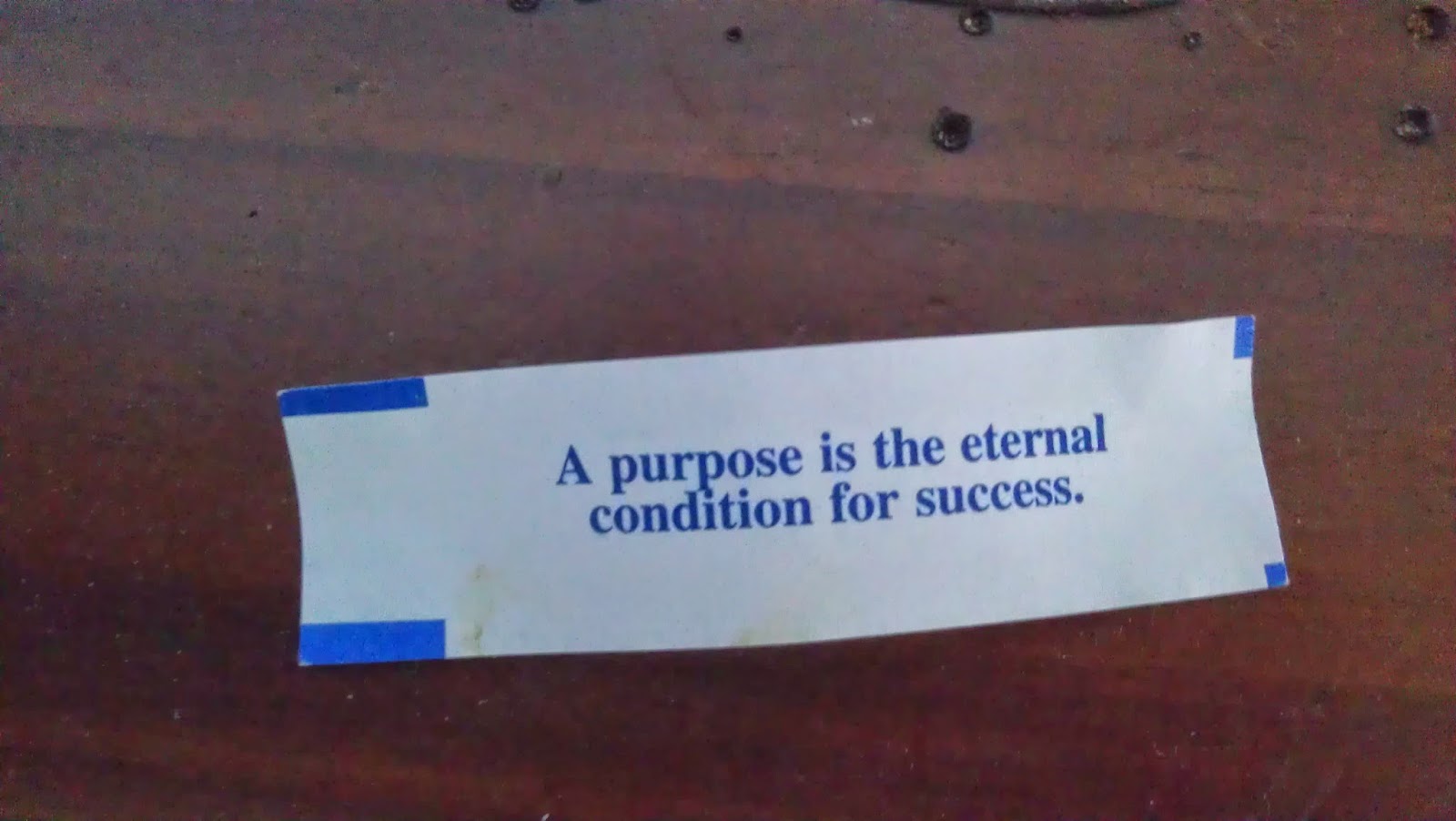 The Universe works in mysterious ways. I run. I'm not fast, I'm not good, I don't particularly like running, but I run. To keep me motivated, I sign up for races. Sometimes I'm well prepared for them, sometimes I'm not. Some are virtual races to raise funds for awesome causes, some are in real life. Either way, races give me purpose. They give my training purpose, even when I don't feel like doing it. They give me a reason to get out and run, walk, hop on the elliptical to get some mileage. The give me a reason to get off of the couch or away from my computer. And that, my friends, equals success.
Posted by Kyra at 6:27 PM No comments: 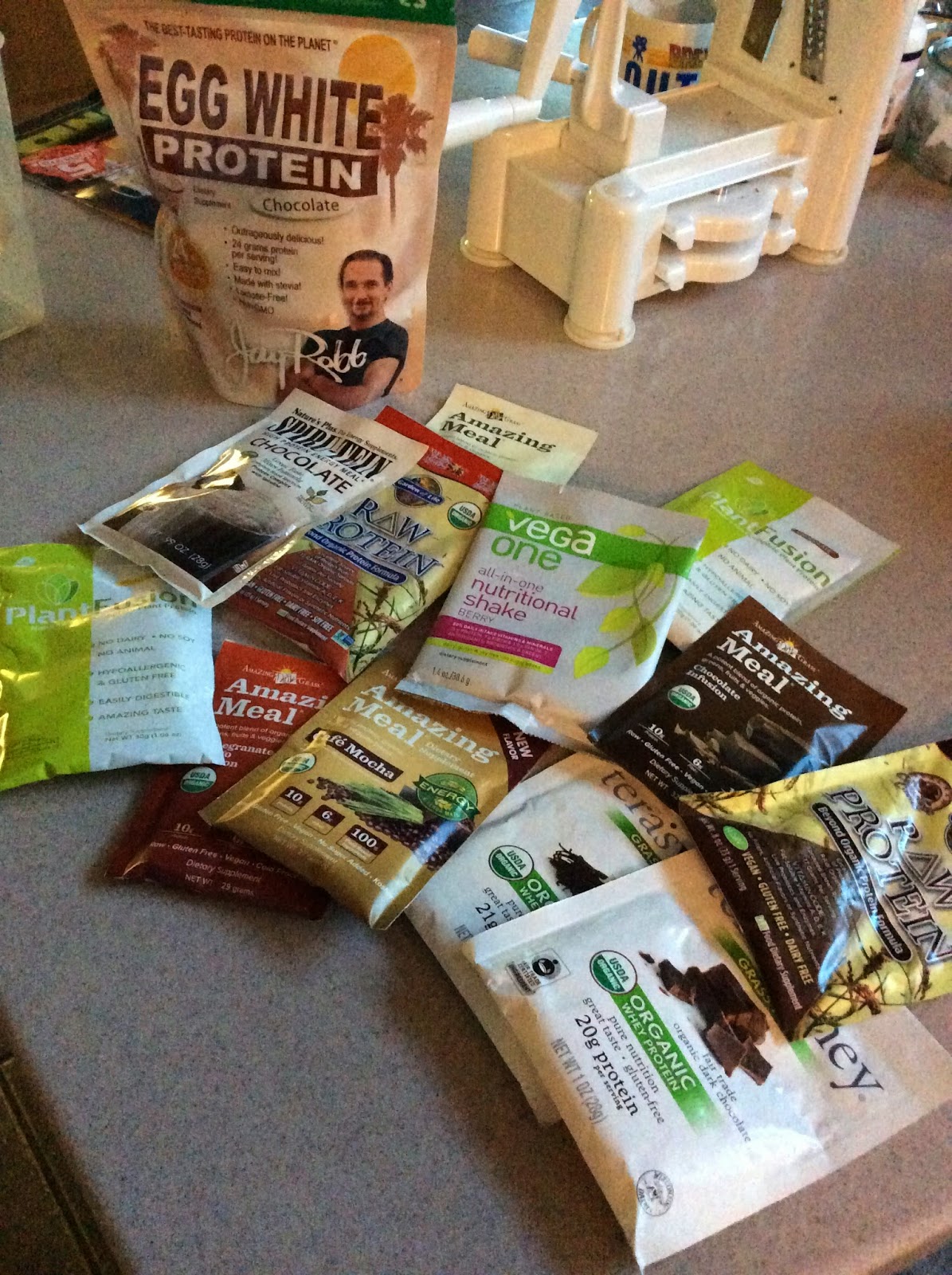 Wow. There are a lot of protein powders out there. To be honest, more than I expected. Egg protein, whey protein, brown rice protein, hemp protein. You name it, I think they've attempted to make a protein powder out of it.

Why was I trying out protein powders? As it turns out, I wasn't getting nearly enough protein as recommended by My Fitness Pal for someone of my size and activity level.  On days when I run, especially long run days, I get seriously hungry. As in eat-everything-in-the-house hungry known as "runger." The best way to combat this is to up your protein consumption. One friend asked "why not just eat a steak?" Unfortunately, for me, it isn't that easy. About a year ago, I went to a specialist because of some digestive issues I had been having. As it turns out, my esophagus is smaller than normal. That, combined with what turned out to be reflux, meant that I have a difficult time swallowing food. As I have no interest in having another endoscopy, protein shakes are my friend. Solid protein = potential problem. Liquid protein = good solution.

Off I went to Sprouts to check out what kind of protein powders they had. DubyaWife recommended Jay Robb egg protein, so I picked up a bag of that. I also picked up just about every variation of single serving packets to see what I liked. I also picked up a container of Alive Ultra Shake in vanilla because it was in the clearance section. Some were good, some were meh, and some got returned because I picked up duplicates, thinking they'd be good. Ugh.

To be comparing on an "apples to apples" basis, I mixed all of these powders with 2 cups of unsweetened vanilla almond milk.

These are my opinions. I bought the powders with my own money.

So, here are the overall results:

Jay Robb Egg White Protein (chocolate) - 24 g protein/120 calories per serving: This was a pretty good protein powder. I like that it has 24 grams of protein per serving. This was the highest per serving of all the powders I tried. It's made with stevia, so it does have a weird sweetener taste. I'm not a big fan of stevia because of its taste. It blends well and isn't gritty. Would I buy this again? Yes, in fact, I already have.

PlantFusion (chocolate) - 21 g vegetable protein/120 calories per serving: This is an entirely plant based protein powder. There's pea protein, artichoke protein, amaranth powder and quinoa powder. I tried the chocolate flavor. It was good, it blended well, didn't feel gritty and it didn't leave gritty residue in my blender bottle. The stevia taste wasn't overly noticeable. Would I buy this again? Possibly, if it was on sale.

Tera's Whey Grass Fed Organic Whey Protein (chocolate) - 20 g protein/110 calories per serving: I picked out the fair trade organic dark chocolate flavor of this protein powder. Oh, man. I had such high hopes for this powder. Such high hopes that it was the first one that I tried. It blended well, didn't leave residue in my blender bottle, but there was something very odd and weird about this powder. It tasted like steak. Would I buy this again? No. I returned the second packet to the store.
Garden Of Life Raw Protein (vanilla spiced chai and chocolate) - 17 g protein per serving/90 calories: Vegan, gluten free, dairy free, this protein blend is primarily sprouted brown rice protein, but there is everything from amaranth, to millet, to garbanzo bean to pumpkin seed sprouts. It also contains stevia, so it had the stevia after taste. This one wasn't as easy to blend. I had to remove the top of the bottle and mush the powder clumps up with a spoon. It was gritty, and left residue in my blender bottle. Would I buy this again? Not terribly likely since there are other good powders out there. One interesting thing about this powder is that the vanilla chai packet touts itself as having no pea protein.

Alive Ultra Shake (vanilla) - 15 g vegetable protein/120 calories per serving: This blend has pea protein, fiber blend, green food/spirulina blend, citrus complex, garden veggie juice powder blend, orchard fruits blend, mushroom blend, digestive enzyme blend. You name it, it's in here. I have to say that it tastes really "green." I got the vanilla flavor, because that's what they had in the clearance section. The canister weighs 34 ounces and was only $10.97, so I'll continue to use this in combination with almond milk, frozen berries, and perhaps a scoop of cocoa powder. It's fine in green smoothies, because they taste "green" from the spinach. Would I buy this again? Maybe.

Vega One All-In-One Nutritional Shake (berry) - 15 g protein/140 calories per serving: I really liked the flavor of this protein powder. It's a combination of pea protein, hemp protein, sprouted brown rice protein, along with omega 3 EFA, green, antioxidant, probiotic and digestive blends. It was fairly easy to blend, but it was a little gritty. The stevia taste wasn't too bad. I'm guessing that brown rice protein is the culprit. Would I buy this again? Maybe. It was on the pricey side.

Spiru-tein High Protein Energy Meal (chocolate) - 14 g protein/96 calories per serving: At last, a protein powder that isn't sweetened with stevia. This had a really good taste. I just wish it had more protein per serving. Would I buy this again? Maybe.

Amazing Grass Amazing Meal Dietary Supplement (cafe mocha and chocolate infusion) - 10 g protein/90 calories per serving: Raw, vegan, gluten free, no sugar added. These blends contain brown rice and hemp proteins, antioxidant blends and energy blends. I picked these out because the Sprouts employee who was helping me said that these were her absolute favorites. I don't get it. They were super gritty and left grit in my blender bottle. The cafe mocha was just plain bitter. Would I buy them again? No. Not worth the grit for so little protein.

On race results and being a slow runner

I am a slow runner. There. I said it. Sometimes I can walk faster than I can run. I read an article this morning that said "There is no difference between the runner who breaks 30 minutes for the 5K for the first time and the one that breaks 16 minutes." My comment to that was that I would be happy to break 35:00 for a 5k. Another comment was that if you finish last there are more people to cheer for you. Maybe if it's a big race, but if it's a small race, I've experienced seeing people driving home while I have had to wait for car traffic to pass, not the other way around. That particular race was one of the worst I'd ever experienced. Now that I'm actually running (I use that term loosely) again, this conversation and article got me thinking about my race times. I dug up the index card I started writing out race results on, looked up a couple of more recent ones (though I was unable to find my results for the 2013 Bold In The Cold 5k) and added them to my card.I actually have broken a 35:00 5k. Once. Go me. 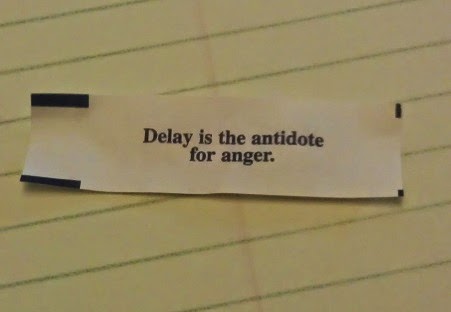 Delay is the antidote for anger. Interesting. The most obvious way to take this would be to not do anything in the heat of anger that you might regret after you've taken some time, calmed down, and cooled off. The less obvious, and rather devious, way to take this fortune would be to not do anything right away, but to let yourself think about what you're angry about and plot retribution. Can you tell I watch The Walking Dead?
Posted by Kyra at 1:56 PM No comments: