It's been fun trying new recipes this week as part of Kenlie's Cook At Home Challenge. This week I've made the following:
﻿ 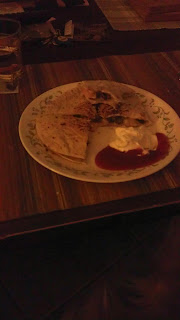 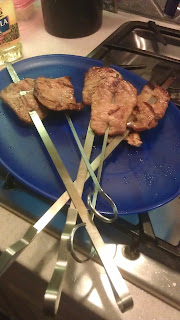 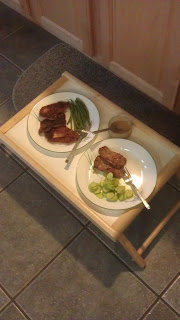 Pork satay with cucumber salad and spicy peanut dipping sauce made with PB2 - awesome! (Please note that the husband got breaded pork cutlet and green beans because it was Doggy-Father's Day and that's what he wanted! He did try mine, though, and liked it.) 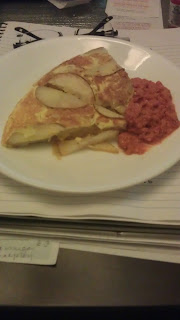 This is the potato torte with romesco sauce from one of the Weight Watchers cookbooks. Eh. It was a waste of the last of my smoked paprika. The cooking time on this recipe were outrageously off and it took forever for the egg beaters to set and cook. I had to cut it in half and flip over so that it was fully cooked. It did not look anything like the book picture, either. On the good side, the potatoes, herbs and tomatoes were all home grown.

I don't have pictures (well I do, but my non-phone camera has grown legs and walked away) of the awesome mixed berry dutch baby that I made on Saturday morning or the grilled salmon that I cooked last night. The dutch baby is from the Weight Watchers Power Foods cookbook and is so good.

Tonight I'm planning on grilling turkey tenderloins that I have marinating in soy, ginger and garlic marinade.
Posted by Kyra at 5:12 PM