After the craziness of yesterday afternoon, spending "quality" time with the dogs and the parrot in a closet under the stairs, listening to tornado sirens blaring and hail hitting the house, I decided to try making no knead bread. I don't know how I stumbled upon this blog but I'm glad that I did. Now I love bread. Probably too much. Especially when it's warm from the oven or bread maker, slathered with butter... oops. Drooling now.... As you know, I've been doing Weight Watchers since the end of October, so it's not a treat I allow myself very often. And since I've pretty much been at a plateau since I hit my 10% goal, I probably shouldn't be treating myself now. That's life, though. I can eat things, but I'd better be prepared to exercise more and eat plently of healthy things, too.

I have a bread machine, which makes great bread. When I've tried to make it by myself, I've totally messed up. Last time, I ended up with bread that wouldn't rise, and was so tough. I think the yeast continued to rise in my stomach, which was NOT a good thing. So when I heard about no knead bread, I thought it would be neat to try. So last night, after I signed off from work, I put the dough together. Flour, salt, yeast and water. Pretty easy, huh? I'm not 100% sure my yeast was fresh enough, but it rose. The trick to no knead bread is that you don't mess with it. It sits in a bowl, on your counter, overnight. Simple.

In a large bowl, mix together the flour, salt and yeast. Stir in the water, mixing enough to ensure that it's worked in. Cover with plastic wrap and let sit for 12-18 hours on your counter. 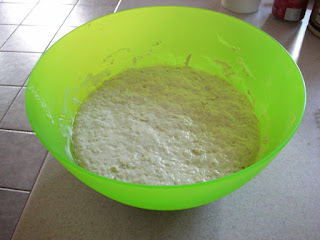 This is what it looked like this morning, after 13 hours. When you're ready to bake, heat up your oven to 450. When it reaches temperature, put your dutch oven and lid in to heat for 30 minutes. (Note: I read that my dutch oven lid can only be safely heated to 400 because of the handle, so I heated the bottom for 15 minutes at 450, reduced the heat, and when it hit 400, I put the lid on and heated for another 15 minutes.)

While the oven is heating, dump out the sticky dough mixture on to a heavily floured counter and shape in to a ball. Mine didn't really come out as a ball, more like a blob. Cover with the plastic wrap and let it rest while the oven and the pan are heating. After the pan has heated for 30 minutes, remove from the oven. Pick up the blob and put it in to the pan. Cover and stick in the oven for 30 minutes. After 30 minutes, remove. At this point, I removed the lid and stuck it back in for a few minutes to get it a bit more brown. When it's baked, carefully remove from the pan and let cool on a wire rack. 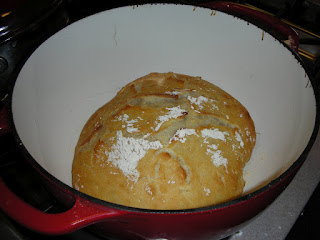 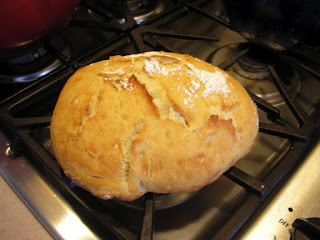 Now all I need to do is figure out how many WW points this loaf is so I don't eat the whole thing!