Welcome to "The Great Chicken Project." This might be a stupid idea (the jury, aka The Aussie, is still out on this), but I'm going to cook my way through the book "365 Ways To Cook Chicken" by Cheryl Sedaker. My Mom has a copy of this 1986 book and I've used several of the recipes over the years. I picked up a used copy on Amazon because I missed having access to the book. I figure if you're going to eat chicken a lot you should have a bunch of recipes to chose from.
Last week, before I started The Project, I made the Kung Pao chicken (pg. 51) with a couple of ingredient variations. Since it's absolutely freezing here I wanted the next dish to be something warm and comforting. The winner was...
Coq Au Vin (serves 4)
4 slices of bacon, diced
1 T butter (I used bacon drippings instead)
1 chicken (3 pounds) cut up (I used 4 chicken thighs)
18-20 small white onions, peeled (I used 4 boiler onions. I cried peeling them too.)
2 cups thickly sliced mushrooms (Yes!)
2 garlic cloves, chopped (I use chopped from a bottle)
2 T flour
1/4 cup brandy (I don't have brandy, so I didn't use any)
1 3/4 cups red wine (I used YellowTail Grenache with the bright pink stripe on the label)
1/3 cup chopped parsley
1 bay leaf
salt/pepper
1/4 t dried thyme
In a large frying pan, cook bacon until crisp. Remove and drain on paper towel. 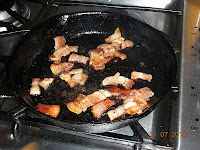 Preheat oven to 325.
I had so much bacon drippings that I poured out most. Season chicken with salt and pepper (both sides) and cook until a nice golden brown. This usually takes about 5-7 minutes on the skin side. I used my cast iron skillet because I've found that chicken browns really well in it. 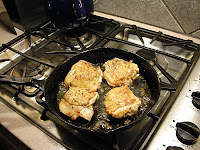 Transfer chicken in casserole dish that has a cover. 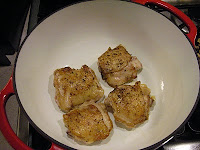 And we're slicing... (I had plenty of mushrooms in the fridge. Memo to self: when inviting people over for New Years Eve dinner, find out *first* if they like mushroom sour cream sauce or stuffed mushrooms. You won't have so many leftovers.) 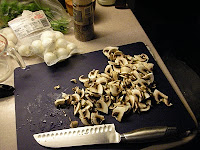 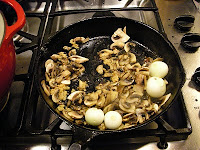 Add flour to the fat in the pan. Cook for 1-2 minutes, stirring frequently. 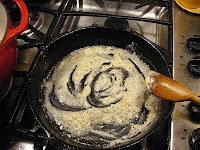 Add the brandy (if you have it) and the red wine to the pan and cook, stirring constantly, until sauce is bubbling and thick. 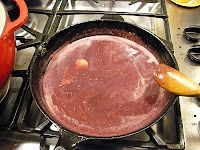 Remove from heat and pour over the chicken. Sprinkle with 3 T parsley (I forgot to do this), add a bay leaf, thyme and the cooked bacon pieces. 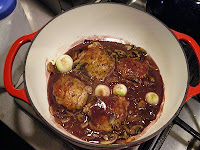 Cover and bake for an hour. When done, remove bayleaf and serve, garnishing with the remaining chopped parsley. 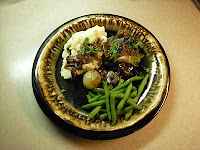 Phew. Day 1 of The Great Chicken Project has been completed. Well, kind of day 2, since I did make the Not Quite Kung Pao Chicken already.

The Verdict: This was a great dish to serve on a cold winter night. The leftovers were great the next day too.