Red Beans And Rice - But Not On Monday - Axis Of Ineptitude

Today's prompt for Axis Of Ineptitude is "Soup For The Soul." What better to feed the soul than something delicious, warming, and spicy, that could have been a family tradition, passed down from your grandparents.

From what I have read, traditionally, red beans and rice were cooked on a Monday, because Monday was laundry day, and the pot of red beans could cook on the stove without a lot of fuss. I don't know if that's how my grandmother's family did it, but they were from Louisiana, so I'd like to think they did. Now, I have to admit, while I did cook red beans and rice yesterday, I did not do any laundry. I also did not cook it on the stove. And it didn't take hours and hours to soak the beans and to cook. In fact, from start to finish, it took about two hours. In a pressure cooker. Yup. A pressure cooker. That means you don't need to soak beans overnight before you cook them. Hooray for gadgets.

My electric pressure cooker has different settings, including saute, so I started with the "trinity" of chopped celery, onion and bell pepper, about a cup of each, and cooked them down in a drizzle of olive oil (no, not bacon grease last night, although I could have used that), for about five minutes.

Next, I added a package of smoked ham hocks. That was a first for me, let me tell you. I stirred that around a little, then added a large link of andouille sausage, cut in to half in sliced rounds. Next in to the pot was a couple of bay leaves, a tablespoon of cajun seasoning mix, a tablespoon of dried oregano, and a tablespoon of garlic powder. 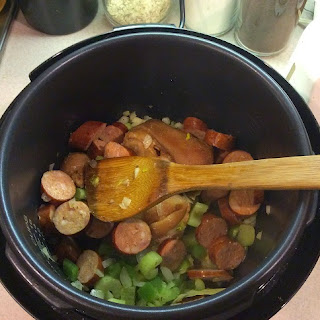 Finally, I added a pound of dried red kidney beans that I had rinsed off, a 14.5 ounce can of diced tomatoes, and 6 cups of water. Here it is, ready to put the cover on. It looks like a lot of liquid, but the beans will soak up a lot of it. 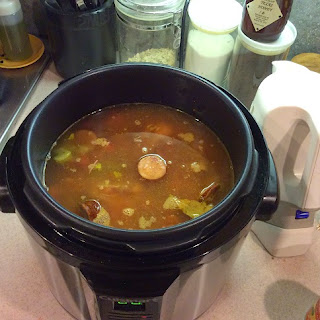 It's the final countdown.... Just kidding. I have the lid on and locked, and have set the cooker on high pressure for 90 minutes. I've read anywhere from 60 minutes to 90 minutes for timing, but since I didn't pre-soak the beans, I wanted to make sure they would be well cooked and soft. 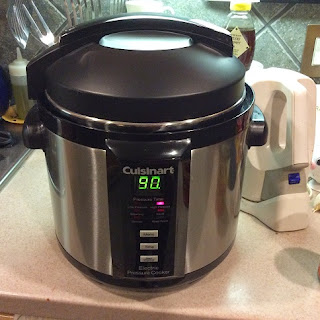 After 90 minutes, presto. You have red beans and rice with amazing flavor. At this point, I removed the ham hocks. For extra yum factor, I sliced up some smoked ham and mixed that in. 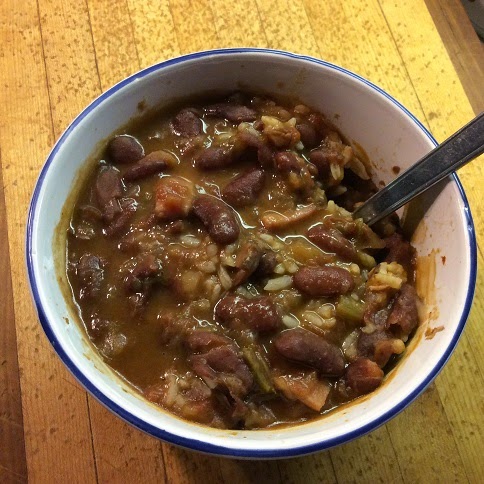 Served over some hot rice, it's smoky, spicy, cream, meaty. Delicious. Truly, a soul warming dish. Not soup, but for the soul...