Don't be an Eeyore

He's cute and huggable, but don't be an Eeyore. I think he's the Debbie Downer of the 100 Acre Woods. When it comes to your health, don't think "why bother, I lost weight before and it all came back," or "I have so much to lose that I can't imagine it ever coming off."

Why bother? Because you deserve it. I had a pretty decent week this past week. I made it to my 20 pounds down goal, and I'm getting closer to my overall goal. The funny thing is, the weight I hit at weigh in this week is what I weighed when I joined Jenny Craig about 12 years ago. And the weight I was when I started Weight Watchers last October is close to what I weighed when I moved to Texas almost 7 years ago. Yes, you might regain some weight, but that doesn't mean you shouldn't try. Life is a learning process, and not all lessons are easy.

And don't be a Pooh. Pooh isn't that great a role model either. A favorite poem of mine, from A.A. Milne, begins "A bear, however hard he tries, grows tubby without exercise. Our teddy bear is short and fat, which is not to be wondered at. He gets what exercise can can, by falling off the ottoman, and generally seems to lack, the energy to clamber back." I was a Pooh, before I started my journey to get healthy. It was a couch, not an ottoman, but the lack of energy was there. I don't always like working out. To be truthful, I'm really not that fussed with the trainer I have at the gym, but it's a small gym without many options. But I feel better when I do work out. No, it isn't easy, but it is worth it when you know you're getting healthier and stronger. 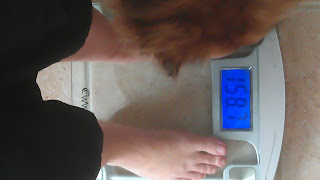