If you're like me, you have a picky eater at home. For many of you, it's your children. For me, it's the spouse. The Aussie is notoriously fussy, but there are some things he really likes. Chinese food is one.
Since moving to Texas I've had to learn how to cook some of our old favorites, as there's no good (and I'll emphasize that word), cheap Chinese restaurants nearby who'll kindly deliver dinner to our door. (Yes. That's not necessarily a bad thing.) One of our favorites is cashew chicken. I know, I know. You're saying "but that's really fattening, I can't believe you're eating that when you're trying to lose weight." Thanks to the magic of technology and WW's recipe builder, I've come up with a really tasty version that doesn't have loads of fat and won't rack up your points. (I don't want to upset any corporation by telling you what that magic number is here, but it did come up in conversation yesterday on Twitter if you want to take a look.) If you serve with rice, that number will change accordingly, so please consume responsibly.
Now serving dinner for four, here we go!
Prep time: 30 minutes (the chicken has to marinate)
Cooking time: 30 minutes
Ingredients:
5 boneless, skinless chicken thighs (this is how many come in the packs I get from Costco)
(if you want to use white meat chicken, go for it!)
2 T soy sauce, low sodium or regular
1-2 T grated fresh ginger (amount depends on how much you like ginger)
1 T cornstarch
1 ounce rice wine (not Mirin - look for it at an Asian supermarket)
------
2 T hoisin sauce (available in most supermarkets)
1 T water
2 T soy sauce
1 t Splenda
-----
2 garlic cloves, grated/crushed
1 cup carrots, large dice
1 cup celery, large dice
1-8 ounce can sliced water chestnuts
1 1/2 ouces cashews
1 large scallion, thinly sliced
cooking spray
Chicken: Trim the chicken of visible fat and cut into 1 inch pieces. In large bowl, combine chicken pieces, 2 T soy sauce, grated ginger, rice wine and cornstarch. Stir well and marinate for at least 20 minutes. 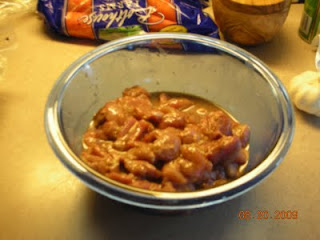 Veggies: While chicken is marinating, chop the your veggies into a large dice, about 1/2" or so in size. I usually use carrots, celery and sliced water chestnuts, but you can also add any other crispy vegetable that strikes your fancy. I was out of water chestnuts last night, so just imagine them in the finished picture. Since the veggies have different cooking times, keep them separate. Now for the garlic. I usually use a garlic press, but I had out my Microplane from grating the ginger, so I grated it instead. Worked like a charm. Last, but not least, thinly slice the scallion on a diagonal. 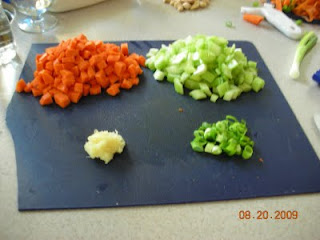 Sauce: Combine the hoisin sauce, water, 2 T soy sauce and Splenda in a small bowl or measuring cup. Stir well and set aside.
Crunchies: To get the lovely toasty cashews for the topping, heat up a heavy pan, such as a cast iron pan, to medium high heat and toast the cashew nuts until they're golden brown. Remove from the heat. (The Aussie loves cashews. If you use 1 ounce instead of 1.5 ounces it will bring you down 1 point per serving)
Heat up non-stick wok or large frying pan to a medium high heat. Give the pan a couple of sprays of cooking spray. Add the garlic and sautee for 30 seconds. Add the chicken. Stir fry until 80% done. Depending on what cut of chicken you use it can be 10-15 minutes. Remove chicken from pan and set aside. 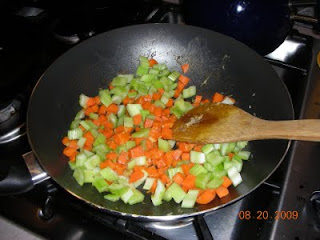 Give pan another spray if you need, and add the carrots to the pan. Stir fry carrots for a couple of minutes until slightly tender. Add in the celery and water chestnuts, stir frying for a few more minutes. When the veggies are tender, but still a little crisp, add the chicken back to the pan, along with the sauce. Stir well and cook for another couple of minutes, until heated through. Mix in the toasted cashews, top with the scallions, and serve. 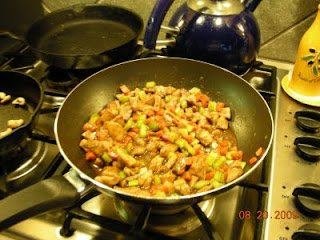 In the words of the immortal bard of cooking, bon appetit!