One of the real pluses to working from home, aside from having the critters with me all day and wearing pajamas yoga pants every day whenever I want, is being able to cook whatever I feel like for lunch if I have the ingredients on hand. Today I started thinking about seafood. After a bit of rummaging around in the freezer, I found the last bag of mixed seafood. I buy the huge bag from Costco and then divide it in to smaller portions that are easier to store in my freezer. Also in the freezer were some individually wrapped portions of cod, some frozen homemade chicken stock and a bag of stir fry vegetables. From the pantry came a can of lite coconut milk, cloves of garlic and an onion, from the refrigerator came half a can of mushrooms that were leftover from last night, a quarter of a tomato, half an orange bell pepper, and red curry paste. (Note: When I was done cooking, I added a splash of rice vinegar, soy sauce, a squeeze of lime and snipped in some Thai basil that is growing in my aero garden)

Since I am all about the gadgets, I pulled out my Instant Pot (don't tell the Cuisinart PC that I brought this back from the ranch) and set it to saute and drizzled in a little oil. While it was heating up, I thawed the chicken stock in the microwave and sliced up  half of an onion in to half moons (lengthwise strips). In to the cooker they went to soften. Next, I sliced the pepper in to thin strips, sliced the garlic, and tossed them in to cook. I had a good rounded spoonful of curry paste left in my jar, so I spooned it in, stirring it in to the veggies. I cancelled the saute mode, and literally dumped in my frozen stir fry veggies, the mushrooms and tomato, the frozen seafood mix (there was about two cups worth in my bag), two frozen cod fillets, 1 cup and a half of chicken stock and the can of coconut milk. I closed the lid to the IP, set it to high pressure for 5 minutes and walked away. In hindsight, I could have done a little less time, but the fish fillets were thick and I wanted to make sure they were cooked through. 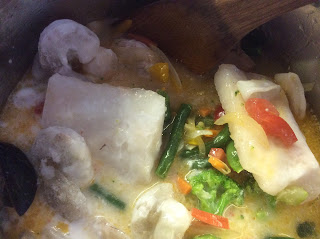 Here it is just before closing the pot. It could have been an epic failure. Since I don't often use recipe, I just never know if something will turn out as well as I think it will. For the most part they do, but cooking with a pressure cooker adds a level of unknown if I've never made something before. 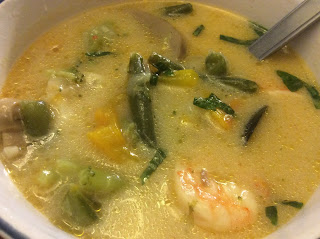 When I was releasing the steam I could smell the aroma of seafood, and it smelled good. Fingers were crossed. There was some splatter on the inside of the pot, but the soup looked great. The fish was cooked beautifully, and so was the calamari. Shrimp are easy to over cook, but I didn't mind so much since they were small. The frozen veggies were soft, but that was to be expected, and helped make the soup soft and soothing. Since shrimp can be salty, I didn't add any salt in the beginning. I tasted the soup, added a splash of soy sauce, a splash of rice vinegar, a squeeze of lime juice (I couldn't find my TrueLime because it was sitting on my desk next to my water glass), and snipped in some Thai basil leaves. I am so please with how this turned out. If you were cooking on the stove, you could add the shrimp last so they aren't over cooked, but I just wanted to see how it would turn out if I basically dumped everything in and set it to cook. It didn't disappoint.
Posted by Kyra at 1:37 PM