All Quiet On The Southern Front

I've been quiet lately. Out of sorts may be a better term for it. The Aussie has finally gotten home after his trip to visit the family overseas. It was sooo quiet in the house. I missed him, the dogs missed him. The parrot, maybe not. I'm sure she thought about it though.

While he was in the Sydney airport on the first leg of his trip, he bought me a snowglobe. On the return, the security personnel confiscated it. He was seriously P.O.d. Well, wouldn't you know that there was a gift shop on the other side of the security checkpoint that had the same snowglobe, so he bought me another one. Hah! He said he'd have to remember to put it in his checked baggage once he reached the U.S. It's really difficult to remember things when you've been travelling for over 20 hours. Needless to say, he forgot to put it in his suitcase before it was re-checked. Thankfully, they had a storefront in the airport where you could mail things rather than have them confiscated, so he had it packaged up and mailed home. So, thousands of miles later, my snowglobe! 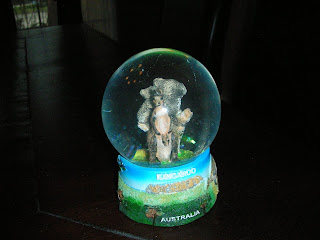